On Monday, August 9th, the Intergovernmental Panel on Climate Change (IPCC) released the first part of their sixth assessment report (AR6) on the global issue of climate change. The assessment consists of over 14,000 climate change-focused research papers that were reviewed by 234 scientists from over 65 countries around the world.

The purpose of AR6 is to identify progress made to the physical science basis on climate change since the IPCC’s last assessment, AR5, that was published in 2013. The primary finding of AR6 is that:

What is the IPCC and Why Does AR6 Matter?

The IPCC was founded in 1988 by the United Nations Environment Programme and the World Meteorological Organization. The purpose of the body was to provide policymakers around the world with comprehensive regular assessments of climate change and its impacts on the environment and humanity, as well as to offer potential solutions for adaptation and mitigation through an economic lens.

The first assessment was published in 1990 and found that: “emissions resulting from human activities are substantially increasing the atmospheric concentrations of the greenhouse gases” […] “the unequivocal detection of the enhanced greenhouse effect from observations is not likely for a decade or more.”

Subsequent assessment reports have been published every five to seven years, with the most recent AR6 being broken down into three parts that will join the other five reports released in this reporting cycle (2015-2023). The first part, published in early August of 2021 after a one year delay due to COVID restrictions, was completed by Working Group I.

Working Group I (WGI) was tasked with assessing the “physical science basis of climate change. The report builds upon the 2013 Working Group I contribution to the IPCC’s Fifth Assessment Report (AR5) and the 2018-2019 IPCC Special Reports of the AR6 cycle and incorporates subsequent new evidence from climate science.” WGI was made up of 234 scientists that were nominated by IPCC member governments from around the world. Due to the pandemic, the working group had to shift to online working, reading, reviewing, and analyzing more than 14,000 research papers that have been published in scientific, technical, and socio-economic publications.

The main findings show that global warming will reach 1.5 degrees Celsius by the early 2030s, with 2 degrees Celsius being exceeded this century if emissions continue at their current levels. The impacts felt today are already affecting weather patterns, the oceans, and people around the world. The report has been called a “code red for humanity” because of its concluding findings, with UN Secretary-General António Guterres going on to say “This report must sound a death knell for coal and fossil fuels, before they destroy our planet” in a statement. 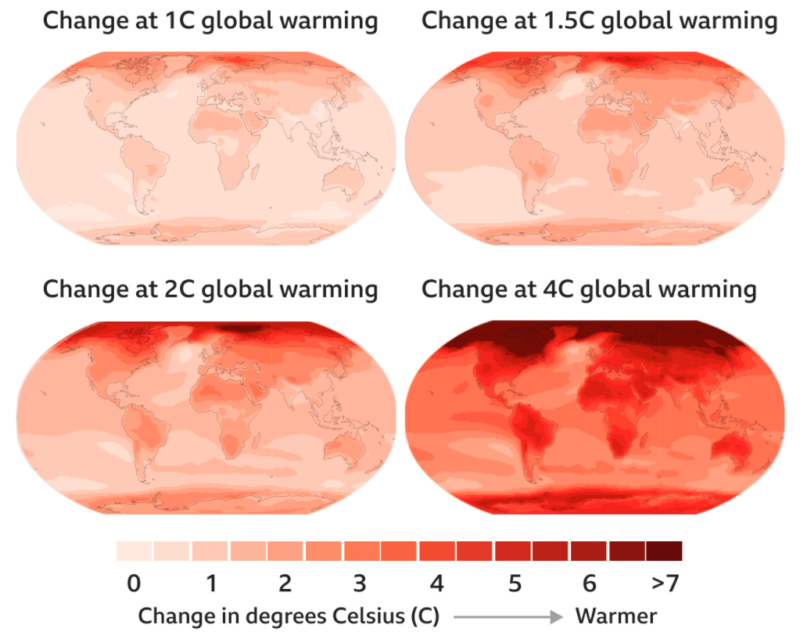 Models put together based on AR6 to show what global warming could look like, depending on increases by 1, 1.5, 2, or 4 degrees Celsius. Source: BBC News

The following two parts of the IPCC report are set to be published in 2022. Part two will focus more on the impacts of climate change on the planet, as well as adaptations and vulnerabilities of societies. Part three will focus on the economic factors and possible mitigation strategies when it comes to climate change. AR6 will combine all the findings form this reporting period into a final Synthesis Report that is expected in September of 2022. However, none of these reports will recommend policy changes. They are meant to serve as summaries of the most up-to-date data for policymakers to consider when addressing the issue of climate change so it’s still up to each nation’s government to translate these findings into political action.

What Does AR6 Say About the State of Climate Change?

Part I of AR6 confirms that human activity is causing an accelerated rate of climate change around the world and that this phenomenon won’t slow down unless we severely curb our greenhouse gas emissions at a global scale. The report highlights in glowing red brightness the urgency of action on climate change, and supporting the rapid adoption of clean technologies to help accelerate the transition to net-zero emissions is one solution we can and must look towards. Industries and infrastructure need to find ways to reduce their carbon emissions in the short term, while phasing out harmful practices in the long term (the long term being within the next decade or two, at best). Funding for cleantech companies should be a priority for investors in both the public and private spheres if we are going to mitigate the most drastic impacts of climate change around the world and we need to act immediately in order to do so.